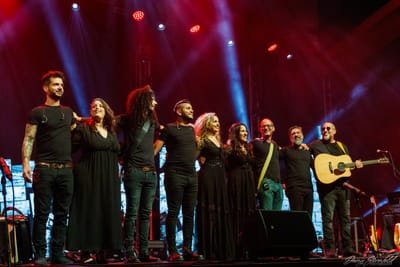 Echoes - Israel’s leading Pink Floyd Tribute Band, was established in Beer Sheva, Israel in 2003, with love and utter admiration for Pink Floyd, for the purpose of recreating the experience of the Floyds’ groundbreaking live shows. The band includes 10 musicians on stage, and includes A drummer, 2 guitarists, keyboard player, lead singer, 3 backing vocalists and a sax player. Together they perform a variety of shows: some are all hits, some include full albums, Concept shows and special collaborations with industry leading musicians and productions. All of Pink Floyd’s greatest songs and albums are performed with stunning visuals and sound, delivering an incredibly close-to-the-original experience.

As expected from a Pink Floyd tribute band, their shows include all the greatest albums like “The Dark Side of the Moon”, “Wish You Were Here”, “Animals”, and more, with landmark songs such as “Time”, “Shine On You Crazy Diamond”, “Comfortably Numb”, “Wish You Were Here”, “Hey You”, “Have A Cigar”, “Another Brick in the Wall”, “Echoes”, “Money”, “Mother” and more. Also, they perform songs from the early Syd Barrett days, before Roger Waters took the reigns, such as “See Emily Play” and “Arnold Layne”, and also later songs and albums from the leading days of David Gilmour, like The Division Bell Album, and songs such as “Learning to Fly”, “Sorrow” and more.

The band also produced and played “The Wall” live with extraordinary visuals and sounds rarely seen in Israel, including incredible visual arts on huge LED screens, fitting to one of the greatest albums of all time. The show received massively positive reviews and high praises, and was booked to tour around Europe in 2022.
Echoes’ Pink Floyd Tribute Show is on tour in Israel, with tours in Europe and the US scheduled soon.

Check out the tour dates to see when “Echoes” will be performing in venues near you.